Why we label sulci

The cortical surface is characterized by alternating ridges and furrows. The sulci (singular sulcus), as the Latin suggests, are the fissures or grooves; they serve as counterpoint to
the raised gyri (see the figure; some of the primary sulci are highlighted in color). The sulci, in a sense, exist because they do not exist. Their utility derives from this fact as demonstrated by the following: 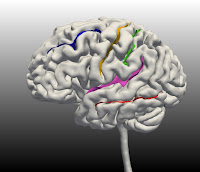 1) In neurosurgery they function as channels which give a surgeon access to parts of the brain even deep within the subcortex. As M.G. Yaşargil, a noted neurosurgeon, writes in the foreword to the Ono atlas [1]: "any point within the cranium can be reached by following the corridors of the sulci." Tissue damage from incisions is thus minimized.

2) They also serve as orienting landmarks in neurosurgery. The major sulci, in addition, partition important functional areas of the brain. This information reinforces their usefulness as landmarks. The central sulcus, for instance, demarcates the sensory-motor cortex. The sylvian fissure, one of the most identifiable cortical features, is the locus of language cortex. Both these sulci are important reference points in a variety of contexts and applications.

3) The sulcal grooves are filled with cerebrospinal fluid (CSF) which make them easy to identify in T1-weighted images (where CSF is dark in contrast to the brighter gray/white matter.)

To be useful in the neurosurgical applications described, we first need to identify and label the sulci. There are other applications that would also benefit from a reliable labeling scheme. Internal changes in the brain, either due to aging or pathology, for instance, alter the cortical surface. Labeling is the first step in a systematic study that allows us to quantify these changes for the differential diagnosis of disease.


Posts on Sulcal Labeling
1) Why we label sulci
2) Why is sulcal labeling difficult ?
3) The use of a spatial distribution model in labeling sulci
Posted by Meena Mani at 1:23 PM

As usual when I see a description coming from neurosurgeons, I am always taken aback by how non technical the explanations are :-)

Why isn't the sulci thought as a way to better cool all part of the brain (including the part that is inside ?

As a first approximation, this surface seems to be optimizing surface area, cooling requirement seems to be an obvious reason for the way it is.

It's certainly an optimizing surface but the reason I didn't mention all that is because I wanted to talk about why one would want to label the sulci.

You bring up a good point about thermoregulation. There are many mechanisms the body has to cool off so this might be one of them. Also
parts of the brain sometimes need to be deactivated (by cooling) for study or to prevent injury. Something else I didn't mention is the Hausdorff dimension or the cortical surface--this may change due to disease.

I work in brain imaging, an umbrella term that includes the acquisition, processing, data analysis and interpretation of brain imaging data. Given that brain imaging is highly interdisciplinary drawing on expertise from a range of science and engineering disciplines, I will restrict my posts to the application of statistics and machine learning methods to brain MRI data. Neuroanatomy, clinical and translational research and all other issues that supply a context to the data analysis will be discussed as well.