The connection between Linus Pauling and fMRI

When I think of Linus Pauling, two things come to mind: his work on  the nature of the chemical bond (for which he was awarded the 1954 Nobel Prize in Chemistry) and, in his later years, his advocacy of Vitamin C. But Pauling is one of the great names of  20th century science. He contributed to a variety or domains and other connections can be made. His campaigning for a nuclear test ban won him a Nobel Peace prize. And his description of the molecular structure of blood -- of sickle cell anemia in particular -- is highly regarded.

Pauling, in fact, had had a long interest in the properties of blood. In 1936 he published an important paper on the magnetic properties of hemoglobin [1]. Hemoglobin, which is a major component of blood, can be oxygenated or deoxygenated and it is due to this easy coupling and decoupling that it plays its key role as a carrier of oxygen. Pauling's experiments had shown that deoxyhemoglobin is paramagnetic (i.e.,  in layman's terms, has magnetic properties) and oxyhemoglobin is diamagnetic. The original paper is worth reading; I was struck by the clear, concise and objective manner in which these results are  presented.

Pauling did not envision an application at the time but from the mid-1960s on much work was done on engineering MR field gradients and studying the contrast they provided for different kinds of tissues. In 1990, Seiji Ogawa published a set of papers [2] showing that local inhomogeneities in the magnetic field were formed in response to  changing levels of deoxygenated blood and could be measured. This property became the basis of BOLD or blood oxygenation level dependent fMRI.

The connection  between neural activity and the MR signal  is roughly as follows:

There is an excellent lecture on YouTube where Geoffrey Aguirre explains this. Another talk, this time by Christof Koch, also briefly mentions Pauling's paper.

Processing a diffusion phantom with FSL

This is a how-to style post intended for FSL users. It may also be of interest to a broader diffusion imaging audience.

In diffusion imaging, a carefully constructed diffusion phantom may be used as a ground truth reference to evaluate competing diffusion models and tractography algorithms. The phantom constructed for the 2009 MICCAI Fiber Cup challenge [1] is one such reference; it is a coronal slice model of fibers that cross, touch and split into different configurations and with different curvatures. The phantom dataset is now publicly available.

I recently processed the raw phantom dataset to evaluate some algorithms. These are some of my notes on how to preprocess the data on FSL through bedpostx. bedpostx is an FSL program that computes the distribution of diffusion parameters at each voxel. It generates all the files necessary to run the probabilistic tractography tool probtrackx. 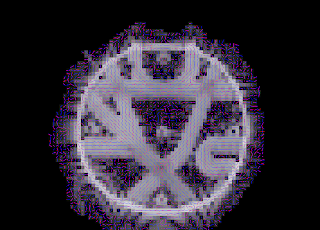 The bedpostx dyads1 output (blue arrows) is overlaid on the dtifit out_V1 (red lines) vectors. We can see that they align with each other.

Some resources
Takuya Hayashi has a program to swap the bvec values.  (Note: I have not verified that it works.)
Posted by Meena Mani at 3:48 PM 2 comments:

A group at Stanford led by Karl Deisseroth have pioneered a chemical process that leaves brain (and other) tissue intact but optically transparent. The procedure, aptly named CLARITY, exposes internal structure by replacing the opaque lipid layers that surround cells with a transparent shape-preserving hydro-gel. Neurons, glia, genes and other molecules of interest can then be selectively highlighted in this transparent brain by molecular markers. The results are spectacular and reminiscent of swimming among the jellyfish.

This is a link to Nature which published the article. The accompanying set of video clips is compelling; in one frame, a single nerve projection is traced out among a tangle of other neurons. The technique will provide a boost for the field of connectomics; researchers who would otherwise have to reconstruct neural wiring from small piece-meal sections of brain will be able to view whole-brain connections in one glance.

Posted by Meena Mani at 8:54 AM No comments:

Email ThisBlogThis!Share to TwitterShare to FacebookShare to Pinterest
Labels: connectomics

The use of a spatial distribution model in labeling sulci

While accurate sulcal identification can be a challenge even for expert neuroanatomists, there are sulci that are to some degree more consistent, and for which anatomical correspondence can be established across subjects. These are the larger primary sulci. The localization of these sulci allows us to generate a spatial distribution or probabilistic map which can be used to label candidate sulci. A graph that maps the structural relationships between sulci can also be constructed and unlabeled sulci (or the more variable secondary and tertiary sulci) can be identified against this reference.

These two ideas, the use of the probabilistic atlas and the graph, have been incorporated into automated and semi-automated labeling methods in various ways. In this post I will present the basic idea behind the use of the spatial distribution model.

The use of a probabilistic atlas
Probabilistic maps compute the probability for each tissue class at every voxel location using a large database of segmented and labeled anatomical structures. Evans et al. [3] coined the name Statistical Probabilistic Anatomical Maps or SPAM for these models. Paul Thompson has a nice description of these SPAM models and the Brainvisa website has a nice visualization of a sulcal atlas which is reproduced below:

A straightforward implementation of the probabilistic atlas paradigm can be seen in Le Goualher et al. [1] [2]. SPAM models give the probability for each sulcal class so that at any given location, unlabeled sulci are assigned the most probable label for that location. In other words, to label a new sulcus

be a sulcal label

where p is the probability from a SPAM atlas
Assign:

Spatial distribution models give spatial bounds but this is not adequate to discriminate between the sulci in a local region. They are usually combined with graphs which model connections between sulci thus giving local structural context. In the combined strategy, the spatial information is used to supply spatial priors [6], localization constraints or to narrow the search space in an optimization or graph matching process [7].

I will write about the use of graph models in my next post.

Posts on Sulcal Labeling
1) Why we label sulci
2) Why is sulcal labeling difficult ?
3) The use of a spatial distribution model in labeling sulci
Posted by Meena Mani at 6:57 PM No comments:

Why is sulcal labeling difficult?

This is a follow-up to an earlier post Why we label sulci. There will be two or three more posts; taken altogether, they will describe the sulcal labeling problem.

The labeling of sulci is a challenging problem. This is because, cortical sulci are highly variable. Sulci vary not just across individuals but even between the hemispheres of a single brain [1]. It might be useful when looking for ways to address this variability to classify this variation as follows:

Variation in physical features
Sulci vary in shape, in scale and in their placement (i.e. position and orientation) The figure below illustrates how the variability can make feature selection difficult. 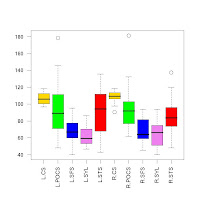 The boxplot shows the length distribution for 18 subjects. The 10 types or classes of sulci shown cannot be identified solely on a length measurement. This poses a problem for feature selection and classification.
Figure credit: Meena Mani


Variation in branching
19th century illustrations such as those from Horsley [2], trace the wide variations along a sulcal fold. A whole nomenclature has developed since then to account for the branch variations possible along a single sulcus. (An example from the Ono atlas is illustrative--see figure below). For this reason, there is no gold standard in sulcal labeling; one neuroanatomist may disagree with another. 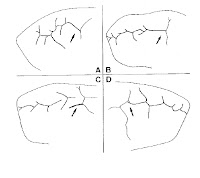 The figure to the left shows the pattern variations for a single sulcus (the posterior end of the superior frontal sulcus). Types A, B, C, D, are possible variations for this sulcus (for the 25 postmortem brains examined, 4 variations were found). The pattern in the two hemispheres of a single subject may differ; the left may be Type B and the right may be Type C. The lengths of the small segments and the connections they make to other sulci may also vary. Reproduced from Ono et al. [1].

Variation in number
Sulci may be continuous (present as one uninterrupted segment) in some individuals, fragmented (exist as multiple segments) in others and altogether absent in yet others. The larger primary sulci which start forming early in fetal development are the most consistent; the secondary and tertiary sulci are not always expressed.


Posts on Sulcal Labeling
1) Why we label sulci
2) Why is sulcal labeling difficult ?
3) The use of a spatial distribution model in labeling sulci

Posted by Meena Mani at 5:00 AM No comments:

The goal of medical imaging is to present the data in a useful format and in a very interesting TEDx talk Anders Ynnerman demonstrates cool new applications in medical visualization that will be possible in the near future.

Graphics processors have become substantially faster in the last ten years. We can now put together** the gigabytes (terabytes if extended to the time domain) of MRI and CT data generated when scanning a single subject and create 3D (or 4D) images from which relevant information can be selectively extracted. This opens up new and very interesting possibilities. One such application is the virtual autopsy where with ipad-style interactions one can look at cadavers in hard-to-maneuver angles or selectively view metal to, for instance, identify the extent of knife stab injuries or locate bullet shards. Ynnerman also suggests touch-sensitive haptic applications: a surgeon can literally touch the data--a beating heart for example--pre-surgery.

It's really a great 17 minute talk--here's the link.

**(Aside from fast GPUs, there are other ways in which people are hoping to handle the explosion of data from these medical scans. The use of oompressive sensing algorithms is one but the more general idea is to reduce the data before, during or after the scan.)
Posted by Meena Mani at 12:41 AM No comments:

Email ThisBlogThis!Share to TwitterShare to FacebookShare to Pinterest
Labels: visualization

Shape analysis: on selecting a set of points or landmarks

One approach to shape analysis (after Kendall) uses a fixed number of points to define a shape. The points may describe an object boundary or an interior morphology such as the veins on a leaf. They may be selected randomly; alternatively they may be landmarks--i.e. points of significance. A set of points, so selected, constitutes a shape summary and the original shape data, that had been extracted from the raw image, is discarded.

One problem with representing a shape in this way is that it introduces a source of variability. Different shapes can be reconstructed with the same set of points. This is especially true if the number of points selected for that particular shape are few.

There are, of course, other approaches to shape analysis that do not involve selecting points (at least not at this stage of shape representation). Deformable templates is one such methodology and its use is quite common in medical image analysis. The shape could also be represented by a continuous function (see for example Younes et al. [1]). But these methods are also computationally expensive.

Posted by Meena Mani at 8:08 AM No comments:

View my complete profile
I work in brain imaging, an umbrella term that includes the acquisition, processing, data analysis and interpretation of brain imaging data. Given that brain imaging is highly interdisciplinary drawing on expertise from a range of science and engineering disciplines, I will restrict my posts to the application of statistics and machine learning methods to brain MRI data. Neuroanatomy, clinical and translational research and all other issues that supply a context to the data analysis will be discussed as well.